The agent that is the leader in failures is not always the worst in the operation, in some cases, it may be that the oldest agents lead the number of failures by the number of times they were evaluated. For this reason, we added a new column called “Representation” in the Training Need Report.

The goal on this column is to show the agent that failed the most in relation to the number of times they were evaluated, providing a percentage view that is much more faithful to the real scenario of their training needs. 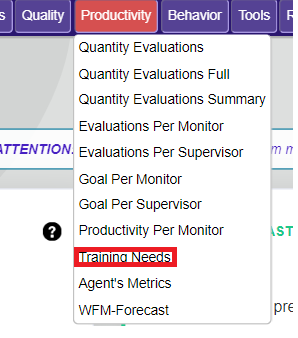 You can filter by date and service channel:

Next, choose the form you want to filter: 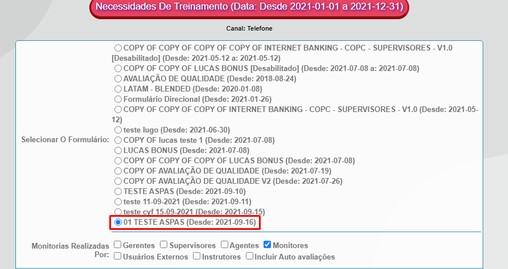 The report now has the column “Representation”:

An example of this new feature:

In the case of the agent ANSELMO ARRUDA SAMPAIO, it had 1 occurrence in the period in which it was evaluated 2 times, therefore, it represented 50.00%.

When exporting to Excel or PDF, the data appears ordered with the “Representation” filter, filtering from highest to lowest percentage.

After clicking the “Consolidate” button

The data in the “Representation” column makes another type of calculation, takes the number of occurrences in relation to the number of items, in the example below, there were 13 items.

According to the example:

When exporting to Excel and PDF, the data appears ordered with the “Representation” filter, from highest to lowest percentage.

If you have suggestions to improve our system, we are open to receive them.

We use cookies on our website to give you the most relevant experience by remembering your preferences and repeat visits. By clicking “Accept All”, you consent to the use of ALL the cookies. However, you may visit "Cookie Settings" to provide a controlled consent.
See our Privacy Policy for more informations.
Veja nossa Política de Privacidade para mais informações.
Vea nuestro Política de privacidad para más informaciones.

This website uses cookies to improve your experience while you navigate through the website. Out of these, the cookies that are categorized as necessary are stored on your browser as they are essential for the working of basic functionalities of the website. We also use third-party cookies that help us analyze and understand how you use this website. These cookies will be stored in your browser only with your consent. You also have the option to opt-out of these cookies. But opting out of some of these cookies may affect your browsing experience.
Necessary Always Enabled
Necessary cookies are absolutely essential for the website to function properly. These cookies ensure basic functionalities and security features of the website, anonymously.
Functional
Functional cookies help to perform certain functionalities like sharing the content of the website on social media platforms, collect feedbacks, and other third-party features.
Performance
Performance cookies are used to understand and analyze the key performance indexes of the website which helps in delivering a better user experience for the visitors.
Analytics
Analytical cookies are used to understand how visitors interact with the website. These cookies help provide information on metrics the number of visitors, bounce rate, traffic source, etc.
Advertisement
Advertisement cookies are used to provide visitors with relevant ads and marketing campaigns. These cookies track visitors across websites and collect information to provide customized ads.
Others
Other uncategorized cookies are those that are being analyzed and have not been classified into a category as yet.
SAVE & ACCEPT
Top